I’ve mentioned before how knowledge of behavioral science can help improve your writing. Continuing with this theme I’d like to introduce you to a good old friend of mine: Cognitive Dissonance Theory. I had to give a presentation about it one time six years ago. I’m basically an expert.

This is why certain organizations choose to haze their members. Once you’re forced to go through a lot of bullshit to join an organization, your brain is naturally going to hold that organization in higher regard. After all, a smart young whippersnapper like yourself wouldn’t go through such great lengths for something that wasn’t worth it.

Once you’ve behaved a certain way, your brain wants to rationalize it. This can lead to shifts in your worldview without you consciously changing your mind about anything.

So what does this mean for writers?

Forcing your characters to behave a certain way will change them.

I know in a former blog post I talked about figuring out the importance of defining your characters’ framework for decision making. I still stand by that, but it’s also important to recognize the value of throwing your characters in a situation where they don’t have a choice. Once they’ve done whatever deed you want them to do, they can change accordingly.

I’ve started trying to get back into Breaking Bad recently and this is what inspired today’s post. There is no logical reason for Walter White and Jesse Pinkman to partner up. They have two fundamentally different sets of core values that would typically prevent them from working with each other. Neither character would ever actively choose to enter into the partnership that defines the series. So how did that relationship come to happen? 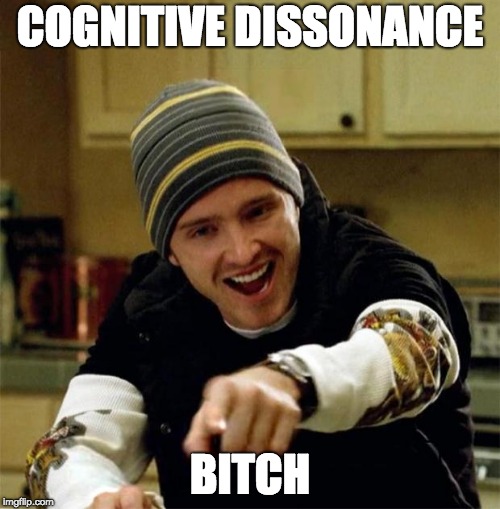 Vince Gilligan created a set of circumstances where the two characters had no choice but to work together. In the pilot, Pinkman loses his partner and Walter is diagnosed with cancer, meaning he needs more money. They don’t choose to start a crystal meth empire. They choose to cook a single batch. But complications from that one experience force them to do other things. They kill people. They destroy the evidence together. They go on to do darker and darker things together. So OF COURSE they’re going to forge a partnership that lasts much longer than a single batch of meth. But yet the two characters remain different enough that they can still butt heads while also being partners.

Choices are important. We learn about characters by seeing what choices they make. But when we take choices away from characters, when they HAVE to do dire things they never would’ve done otherwise, that’s how you get yourself a character arc.